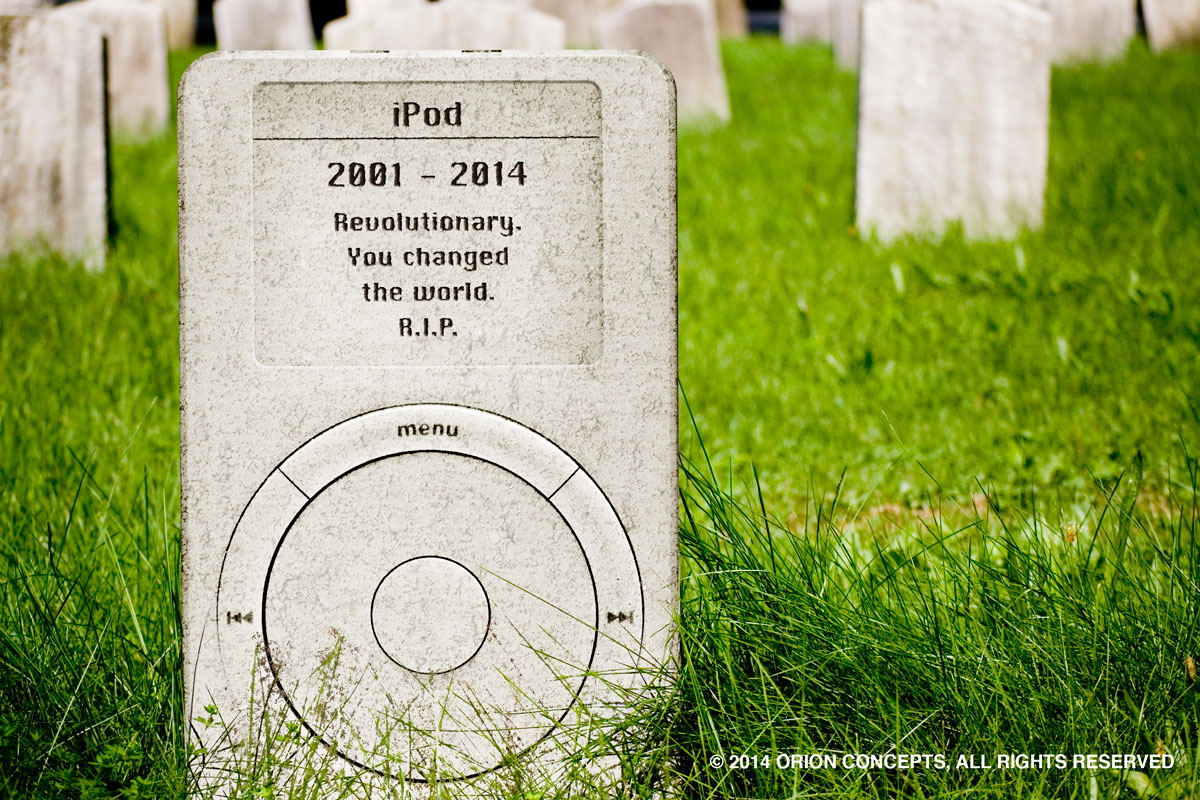 14 Sep Obituary for the iPod Classic

Posted at 19:14h in Technology by Bruce from Orion Concepts
Share

After 13 years, Apple has discontinued production of their iPod Classic. Originally launched in 2001 with its then mind-boggling claim, “1,000 songs in your pocket”, the revolutionary device changed the fate of the struggling technology company, made Steve Jobs a Demigod and ultimately changed the world.

In the years before, Apple had experienced a dark age plagued by unsuccessful products (Google: “apple newton”) and a nearly complete marketshare loss to cheaper PC-based competitors. In the perfect moment when society had just embraced Napster and music piracy – I mean, “file sharing” – the company released the simple, sleek, quirky little white box to a thirsty audience of consumers in need of a way to experience their newly swollen music collections on the go.

The cornerstone of Apple’s new empire: the iPod was the prototype for their signature super-minimal aesthetic, the figurehead of their growing fleet of retail flagships, and the heart of their ultra-sexy advertising campaigns – not to mention, the reason we all love “Feel Good Inc.” by Gorillaz. Setting off a chain of follow-up innovations and an unstoppable market takeover, the iPod was the catalyst of Apple’s future game changers iTunes, the iPhone, the iPad, the iWatch and the i-what’ll-they-come-up-with-next. Catapulting Apple to their status as the world’s greatest brand and a company with twice the cash of the US government, the iPod was the little white box that built a giant clear empire.

Steve Jobs’ brainchild and a true masterpiece of design and innovation, it fit in your pocket, didn’t skip, held your entire music collection, made you look like someone worth knowing and sometimes, may have even gotten you laid. With just a few simple controls and a no-frills display, the iPod was quite possibly the best designed anything, ever. Bravo Apple! For this, we will always love you and iPod Classic, you will be missed but never forgotten.

After a five year struggle with low sales and no updates, the iPod Classic finally succumbed to its battle against obsolescence. The iPod Classic is survived by later generation variations the Nano, the Shuffle and the Touch; siblings the iPhone and the iPad; and a suite of technology products including iTunes, Apple TV and the Mac line of computers.