Posted at 11:38h in Art & Design, Lifestyle by Bruce from Orion Concepts
Share

Of the many atrocities committed by the Nazis during their regime, one of the lesser know was their ban on modern art. Deemed Degenerate Art, or Entartete Kunst in their native German – the term also dubbed as the title for their notorious exhibition held on the subject in Munich in 1937. 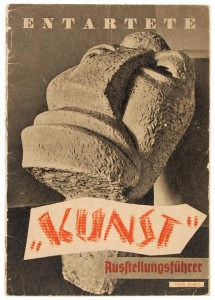 This past weekend, I experienced a haunting immersion into that world at the Neue Galerie’s exhibition on the subject, aptly named “Degenerate Art: The Attack on Modern Art in Nazi Germany, 1937”. Spread out over two floors, the collection was one of the largest I’ve seen of theirs and curated with extraordinary precision.

Devised to emulate what it felt like being bullied through the Nazi’s world back in 1937, the experience begins with an abrupt greeting by an overwhelming display of propaganda posters forcibly corralling you down a narrow corridor leading into the heart of the exhibition itself. Upon entry, the “degenerate” art is juxtaposed with its “acceptable” counterpart in a similar manner to the original exhibition – 1937’s Entartete Kunst was held concurrently with the Grosse Deutsche Kunstausstellung or Great German Art Exhibition in an attempt to show the Nazi approved “dos and don’ts” of expression.

Through vignettes chronologically arranged from room to room, the exhibition tells the era’s story, including some of the more twisted details. One that stood out was that many Nazi leaders had been outspoken supporters of the modern art movement in the years before the regime’s peak but would eventually reverse their position on the subject. What other beliefs were they abandoning? That idea of a person, or an entire population, being able to be just fall in line like sheep – with such a destructive cause and against their personal convictions is horrifying. Zombies.

As we move through the years, the exposition reveals a strange arc. Initially, the abstract paintings and sculptures were meant to be outshined by their traditional parallels but what actually happened was the opposite. Over 2 million people flocked to the original Degenerate Art Exhibition vs less than a third to the Great German Art Exhibition. Capitalizing on the artwork’s popularity, the Nazis actually went on to hold many other modern art exhibitions in the form of “Degenerate Art” shows. The hypocrisy is incomprehensible.

Full of amazing pieces and packed with historical details, this exhibition is by far one of the most comprehensive and possibly one of the most important ones I’ve ever seen. It’ll be running all summer through September 1, definitely check it out if you’re in NYC.